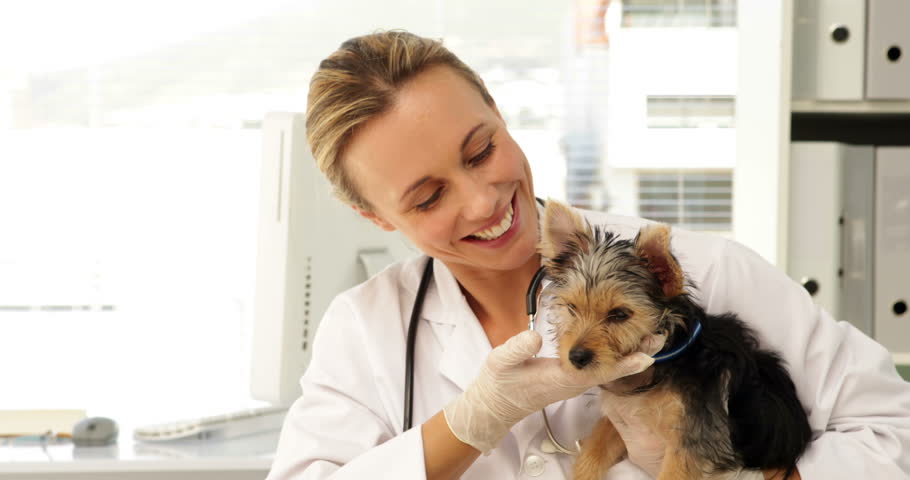 Yorkshire Terriers, like other dogs, are at a risk of developing breed-specific health issues. Common Yorkie health problems fall into three categories: congenital, genetic, and acquired. Even getting a dog from a careful breeder may not ward off inherited conditions, as genes can skip several generations. You may not be able to prevent your dog from developing a problem, but if you can recognize the signs of common Yorkie health problems, you’ll be able to help your Yorkie get a faster diagnosis and start treatment.

While most problems hit dogs in their older years, hypoglycemia is one of the few common health problems in Yorkies that typically appears at a young age. Hypoglycemia is unusually low blood sugar level. This acquired condition appears in Yorkshire Terriers and other toy dogs more than other dog breeds. Symptoms of hypoglycemia include energy, drowsiness, lethargy, fainting, and weakness. Puppies (up to five months) are commonly affected, but this ailment can surface in adults too. A quick fix for hypoglycemia is rubbing sugar or honey on your dog’s gums. You can also feed your Yorkie protein-rich food every few hours. When you take your dog to the vet, he or she can perform medical tests and create a long-term nutritional plan. More info: http://www.petmd.com/dog/conditions/endocrine/c_dg_low_blood_sugar

Legg-Perthes is among the most common health problems in Yorkies. This genetic degenerative disease affects certain Yorkshire Terrier lines more than others. Unlike many degenerative conditions, it is prevalent in younger dogs between five and eight months old. Legg-Perthes Disease weakens the hip joints by restricting blood flow to the femur. Without that vital blood supply, the hip joint weakens and becomes deformed. The bone collapses and cartilage around it cracks. Limping, lameness, and pain can indicate the presence of this disease. Surgery is the standard treatment for this disease, with a good prognosis for recovery.

In most cases, Retinal Dysplasia is inherited. It can also be caused by damage to the eye from trauma or an infection. This condition affects the tissue, or the retina, behind the dog’s eyeball. Vision problems occur as a result. In severe cases, the Yorkshire Terrier becomes completely blind. Dogs diagnosed with Retinal Dysplasia are discouraged from breeding due to the disease’s likelihood of passing along to subsequent generations. In mild cases, the dog just has small blind areas and displays few, if any symptoms. In more serious cases, your dog might stumble on stairs, run into furniture, and have trouble navigating around objects. Retinal Dysplasia is often discovered during a routine annual exam. A certified ophthalmologist with the Canine Eye Registry Foundation can also administer an official test. There is no treatment for Retinal Dysplasia, but you can make life easier for your pet by keeping food, toys, and water in the same place, walking along the same routes, and not rearranging furniture.

Luxating Patella, or kneecap dislocation, is a birth defect that causes the tendons, tissues, and ligaments around your Yorkie’s knees to develop improperly. As a result, the joint becomes unstable. When the kneecap slips out of place, your dog might yelp or let out a high-pitched sound. He or she might walk with a limp, walk with an uneven skipping gait, or have trouble bending the legs. If left untreated, Luxating Patella can result in your dog losing mobility. Bed rest, usually three to six weeks, is recommended in mild or moderate situations. Your vet might also prescribe anti-inflammatory medicines and encourage you to walk your dog up hills to strengthen the muscles around the knee. Surgery is reserved for severe or chronic cases, and it has about a 90 percent success rate.

Collapsed Trachea is a genetic condition that affects Yorkies and other toy dogs. In affected dogs, the cartilage rings around the trachea are softer and weaker than those in other dogs. They can become tight or collapse as a result. In addition to arising from genetics, Collapsed Trachea can be caused by abrupt force, such as an owner yanking on a young dog’s leash. Symptoms include gagging, labored breathing, noisy breathing, and coughing. Treatment depends on the severity of the condition. Your vet might prescribe a low-fat diet if your pet is overweight. Using a harness instead of a leash and collar can alleviate pressure on the trachea, and medication can be prescribed to reduce swelling. Surgery is performed in advanced cases and has a good prognosis.

Liver Shunt, also called Portosystemic Shunt, is an abnormality in the portal vein. Consequently, blood flow to the liver is impaired, and the livers can’t properly clean blood. Unclean blood then pushes toxins into vital organs including the heart and brain. Symptoms include jaundice, lack of appetite, seizures, muscle weakness, loss of cognitive function and vision, and weight loss. This condition is life-threatening and requires early treatment. Antibiotics and dietary adjustments are recommended in the early stages. Surgery is used to the problem permanently.

We use cookies on our website to give you the most relevant experience by remembering your preferences and repeat visits. By clicking “Accept All”, you consent to the use of ALL the cookies. However, you may visit "Cookie Settings" to provide a controlled consent.
Cookie SettingsAccept All
Manage consent

This website uses cookies to improve your experience while you navigate through the website. Out of these, the cookies that are categorized as necessary are stored on your browser as they are essential for the working of basic functionalities of the website. We also use third-party cookies that help us analyze and understand how you use this website. These cookies will be stored in your browser only with your consent. You also have the option to opt-out of these cookies. But opting out of some of these cookies may affect your browsing experience.
Necessary Always Enabled
Necessary cookies are absolutely essential for the website to function properly. These cookies ensure basic functionalities and security features of the website, anonymously.
Functional
Functional cookies help to perform certain functionalities like sharing the content of the website on social media platforms, collect feedbacks, and other third-party features.
Performance
Performance cookies are used to understand and analyze the key performance indexes of the website which helps in delivering a better user experience for the visitors.
Analytics
Analytical cookies are used to understand how visitors interact with the website. These cookies help provide information on metrics the number of visitors, bounce rate, traffic source, etc.
Advertisement
Advertisement cookies are used to provide visitors with relevant ads and marketing campaigns. These cookies track visitors across websites and collect information to provide customized ads.
Others
Other uncategorized cookies are those that are being analyzed and have not been classified into a category as yet.
SAVE & ACCEPT